Psychic or sceptic, you’d be forgiven for thinking that a man born under a full moon, on a Good Friday the 13th, must have ‘something‘ to answer for? Well Marshall Okell is certainly up to ‘something‘. As his timely arrival into the world set precedent, there’s certainly nothing ‘ordinary‘ about it.

Aptly named after two of music’s greatest rock/bluesmen (Jimi ‘Marshall’ Hendrix and Johnny ‘Dawson’ Winter) Marshall Dawson Okell was born on April 13th, 1979, into a Rock n Roll arena, with a guitar case for a crib.

His father Glenn was a Melbourne based rock-n-roll guitarist and Marshall’s greatest lifetime influence, nourishing his son’s musical appetite with the sounds of Hendrix, Winter, Muddy Waters, Little Feat and AC/DC. Nestled amongst the roaring sounds of his father’s amplifiers, the young Marshall found his groove and a musical sensation was born.

Growing up on the NSW far North Coast, Marshall’s stomping ground embraced the pumping surfing scenes of Lennox Head, Byron Bay and Ballina, where he fostered a strong connection with his local environment and the community.

Pre-destined for a life on the stage, Marshall’s first band, ‘The Immortal Flames’, was formed at age 11, with successive groups including punk and hard-rock bands, ‘Noosphere’ and ‘Spirit’. By the time he had reached his 19th year, Marshall had already established himself as a seasoned musician, having supported hundreds of older bands and played nearly all of the live music venues in the region.

Upon reaching his twenties, Marshall’s musical horizons began to expand and his band ‘Marshall and the Fro’ emerged. Marshall took with new passion to song-writing, singing and developing a soulful, earthy, mojo-blues slide guitar sound – a talent he has become synonymous with.

Alongside his musical pursuits, Marshall completed a BA in Social Science, as well as a Dip Ed in High School Teaching at Southern Cross in 2006, where he spent time tutoring special needs and indigenous children.

In testimony to his life and connection with his local community, Marshall’s songs carried with them not just a sense of raw emotional power, but a social message that communicated a deep affinity with the true spirit of his home ground. His love for his family, friends and wider society was evident in the passion with which he sang, and also made continual social commentary on and off stage.

‘Marshall and the Fro’ released two albums and an EP between 2005-10. The first self-titled full album in 2007, ‘Marshall and the Fro’, set the stage for a new wave of pumping surf mojo roots and blues, including the hugely popular tracks ‘Get Up’ and ‘Thongs’. The second album ‘Friends for Life’ followed suit in 2010 and began a distribution deal with ‘Only Blues Music’.

Marshall and the Fro graced the stages of festivals including Bluesfest, Woodford, The Quiksilver Pro and more. Having become established as the quintessential sound of the Aussie surfing mojo blues, the band enjoyed an illustrious period of touring and airplay, featuring on international surf film scores, receiving multiple awards and collecting a loyal fan base along the way.

In 2011 Marshall and the Fro parted company, with the band dividing their time between life on the road and home. Marshall, being the ever-roving musician, opted to continue with his touring lifestyle and a new period of musical self-exploration began.

2012 heralded a year of heartbreak for Marshall as he struggled through his father’s ongoing battle and eventual loss to terminal cancer. This was compounded by the tragic death of his close friend and co-producer Brian ‘Birdy’ Burdett, who was killed during the making of Marshall’s posthumously named third album.

The making of ‘Birdy’ drew upon the raw emotion and inevitable pain that enveloped Marshall during this time and gave rise to a more soulful, mature approach to song-writing. It carried with it the influence of Birdy’s mellower, Paul Simon/James Taylor-esque sound and saw Marshall embrace a deeper, more rhythmic musical style.

Now in his 30’s and with up to 200 live gigs a year as part of his repertoire, Marshall has developed into an Aussie rocking bluesman like no other. His ever expanding list of musical accolades includes awards for the 2012 ‘Best Blues & Roots Artist’ at the Oz Music Awards. He has also been a winner of the of ‘Album of the Year’, ‘Song of the Year’, ‘Best Male Vocal’, ‘Best Protest’ and ‘Best Blues & Roots Artist’ at the NCEIA Dolphin Awards.

Having worked his way through no less than five tour vans, an unwavering dedication to the stage and what can only be described as some time ‘off the rails’, Marshall boasts a live crowd-following that puts most working musicians to shame. He has played alongside the likes of John Butler, Ben Harper, Wolfmother, Buddy Guy, The Cat Empire, Jeff Lang, Gomez and Xavier Rudd.

Annual trips to the snow have seen him playing gigs up to seven nights a week for more than three months on end. His period of grieving in the years following ‘Birdy’ stripped him back to basics and injected a hefty dose of reality to his song-writing and musical heart and soul.

Arriving in 2015, his development as a musician is starkly evident in his fourth album Sipping on Rocket fuel. Picking up Best Blues at the NCEIA dolphin awards Sipping on Rocket fuel draws Marshall back to his roots and shows a record full of bounce, boogie and lightning bolts of mojo music. Its the album Marshall always wanted to make, drawing on his dads old playlists and a million kms of touring in old smelly Toyota vans!!!

With years of playing now under his belt, Marshall has made a notable return to the music of his youth, combining his love for legendary Soul and Blues singers like Little Feat, The Allman Brothers, Hat Fitz, Mavis Staples and Muddy Waters, with his undisguisable Hendrix, 70’s Woodstock sound.

The result is a deep, raw, honest, dirty blues sound that grabs you by the throat and then sooths you with a sweet honey tasting musical medicine. There are pure guts, sweat and emotion in his latest material that leave you exhausted and elated in their wake.

For those loyal followers that have watched him play over the years, Sipping on Rocket fuel heralds a more honest interpretation of who this man is on the stage. His guttural energy needed capturing and canning in record form and his latest album has done that and more besides.

As with his previous recordings, Marshall enlisted the help of fellow musicians and friends ‘The Hussy Hicks’ Leesa Gentz and Julz Parker, as well as band members Nicolas Lemits, Ben Cox and Tracy Stephens in the making of the new album. He describes his time in the studio with his company as a period of “Great, soulful, natural expression with no protection and a great team to throw ideas around.” Some of the material has been ten years in the making, with additional song-writing input from his university friend and creative writing influence Matty Cummins. There’s a distinct evolution in his writing style and the obvious passion for his life, loves and ongoing social commentary is there for all to hear.

Be warned. Marshall has emerged with a new level of addictive, heart and mind altering musical energy. This guy doesn’t just make music. He’s a roaring powerhouse of a man, and this album will get under your skin, into your blood and course through you like a visceral super-high of the likes you won’t come down from easily. 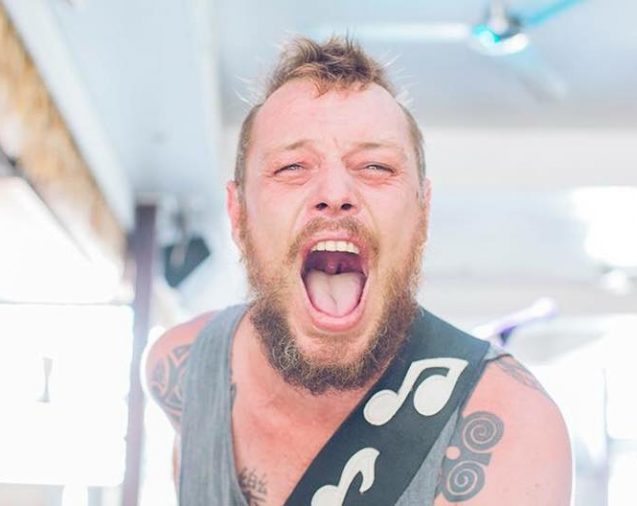